15 mistakes we make when working with text

15 mistakes we make when working with text

Typography, which means arranging and styling symbols in the text, is an important part of the design as color, composition, and graphic elements. However, often text, and therefore, typography, have not been given enough attention and are perceived as a separate design element.

website, poster, infographic, cover letter, or textual editors (Microsoft Word, Notepad).  We will go over how to make the text easy to read and, therefore, make the process of reading it pleasant. 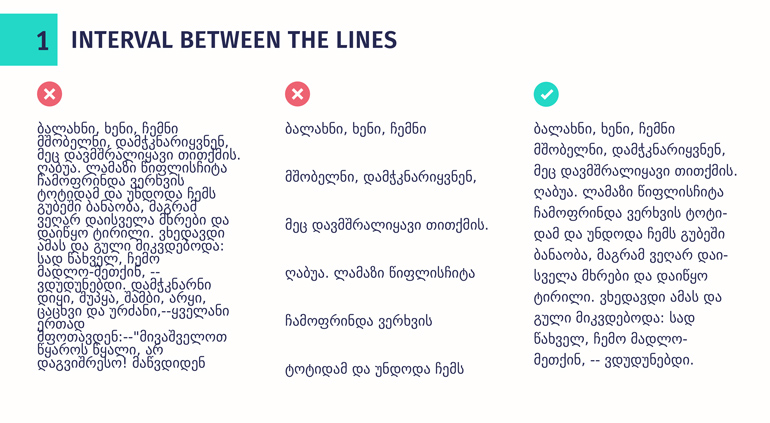 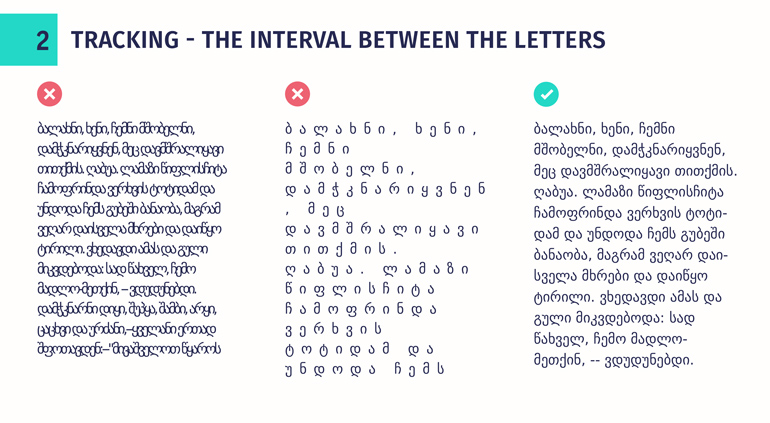 Tracking is the interval between the letters in a word or phrase. When the characters are standing near each other, it decreases readability, while wide spaces makes it difficult to recognize a group of letters which create the word. After seeing a word a few times, the brain remembers it and does not require the word to be completely read in the future We recognize the word from the beginning, but if the letter spacing is too wide, the brain cannot recognize the word.

Kerning is the space between two letters. The measures should be decided by the designer or typographer, considering the experience and knowledge of the case. There are no rules; the interval depends on specific font size.  This is a fairly time-consuming activity because it requires determining the distances for different sizes individually. 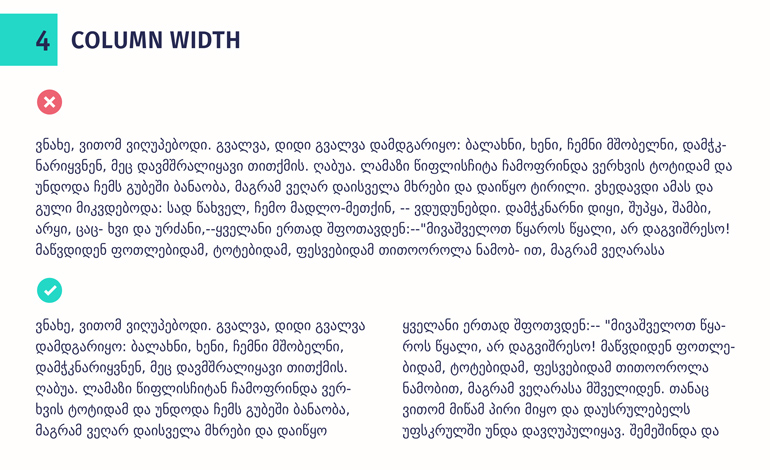 Very long lines of text create discomfort and makes eyes exhausted. Therefore, it is appropriate to use columns for long text. If text has multiple columns (for example, newspapers), characters in one line should be 40-50, and, if there is a single column of text (for example, a blog or other), the line should have 50-70 characters. 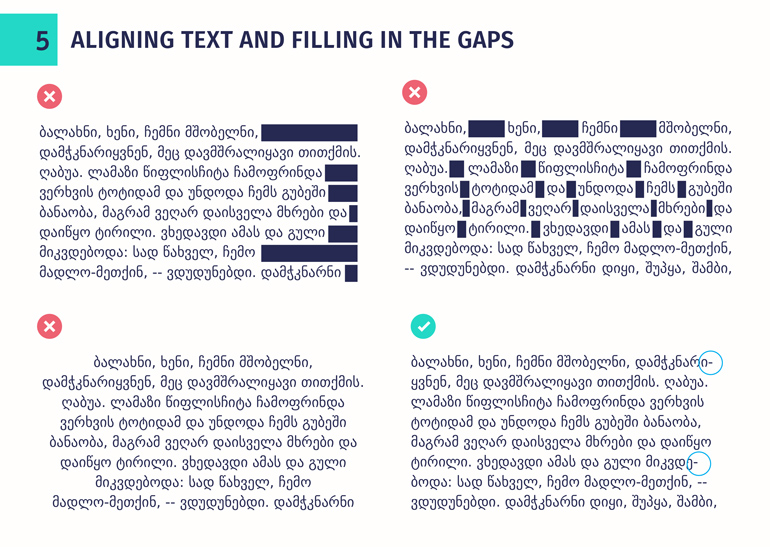 When aligning text (i.e., left, right, center), different size gaps appear and are often ignored, but they should not be. Design applications do not automatically wrap text, so the wrapping must be done by hand and, while doing this, stylistic corrections should be made to make the gap more uniform.

Often, when we want, to make the important text more visible, we underline it, make it bold, and/or use different fonts which produce a very overcrowded image. More than two fonts, different styles, thicknesses, colors should not be used. It is desirable to use fonts from one or two families with different styles and thicknesses.

Because Mkhedruli font (small letters) perception is much higher than in the Mtavruli (capital) letters, it is better not to use the latter in long text. Mtavruli may be used in headers, slogans, and short texts, where the number of words can be a maximum 6. 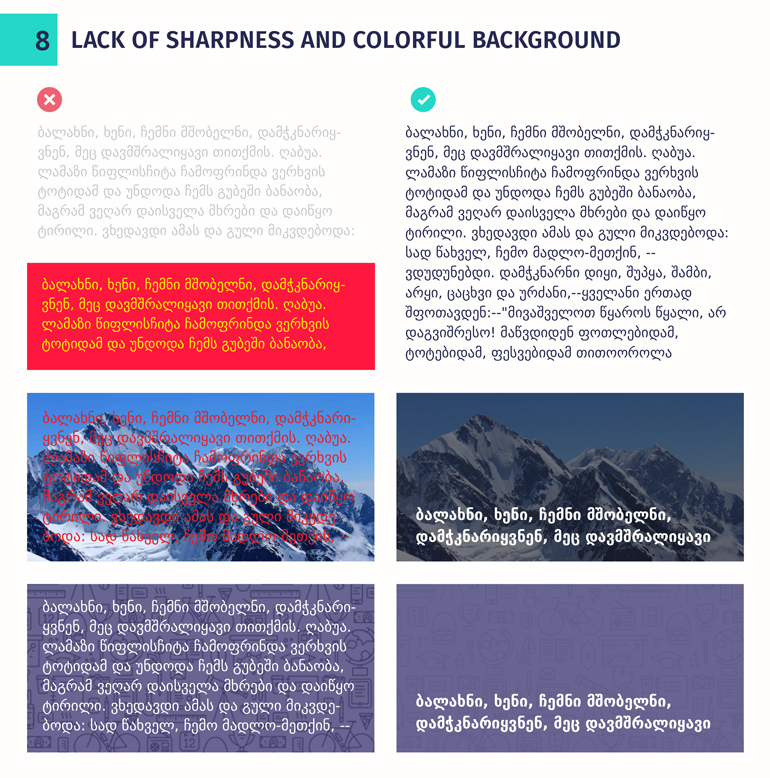 Mistakes in the first column:

In such cases, it is better to isolate from the text and image. In extreme cases, we can put maximum 5-6 words over the image. 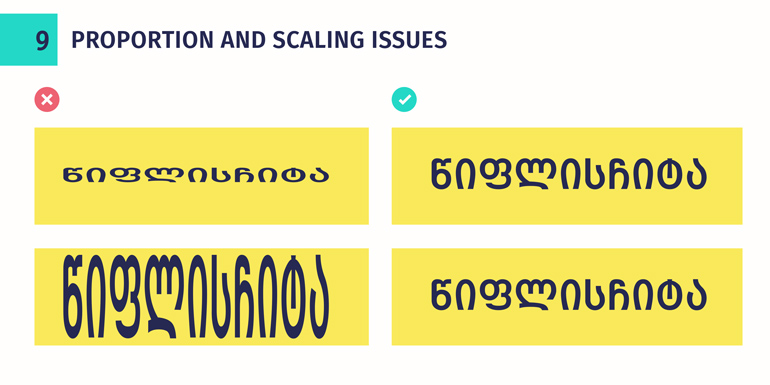 Manual stretch on the width or height of the font will have a bad impact on the perception and resolution of the font. Stretching leads to distortion of the circular shapes (horizontal and vertical strokes) and changes the ratio of stroke contrast with each other.

The design is an opportunity to organize information and the process begins by creating a hierarchy. It is important to protect the hierarchy, as it becomes easier for the reader to get the information. The hierarchy can be created in the size, font style, thickness of stroke, or another method (e.g., naturally we read from left to the right, so often the most important elements are posted in the left upper corner).

When we want to write a slogan or a call to action and we want it to be more convincing, it is best to use capital letters. If you look at the political parties' election ads, you will see that, in most cases, they are using this method.

Often people use the "WordArt" tool in Microsoft Word, which will allow styling fonts: 3D effect, exterior and interior shadows, gradient, waves, relief effects and other. You can use this form to attract attention, but it will come off as being like a cheap image. An over-crowded visual catches all of the attention and the content is no longer in focus.

In nature, there is no such unique font that will fit every image. It's like everyone having the same face or all actors talking with one voice in movies. It is desirable to use different fonts, otherwise, nobody will understand it is a bakery, a pharmacy, or a hardware store. To be memorable and not lose your individuality, create your own font or hire a font designer. In this way you will support the development of Georgian Fonts and your brand image will also be unique.

When working with images, it is important to always keep the original version of the image in the proper file format so in the future the file can be reused and resized without losing quality.

If the image is in raster format (e.g., jpeg, png, tiff, etc), it is a combination of many pixels which form to create an image. Unfortunately, when the image size has to be reduced to fit the design, the pixels have to be merged and a lower quality image is produced. You may know this as being ‘pixelated’.

Vector format  (e.g., AI, SVG, EPS, PDF) is a set of geometric objects. When you create a design in a vector program like Illustrator, the program remembers the geometrical formula for the design. When the design is scaled in size, the formula is recalculated producing no loss in quality. You can use the vector file to generate raster images for the web, but you should always keep the vector file so you can reuse it for future needs (e.g., printing).

We use quotation marks often, but few people know how to use it properly. The first option is not used in any language. The second is for Georgian and German, the third - for English.

If you do not know how to generate Georgian quotations correctly: